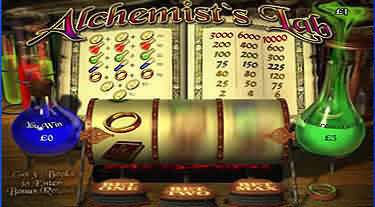 The Alchemist’s Lab online slot is a game that embraces many early facets of life such as science, spiritualism and art. Like the story of turning lead into gold, when playing the game you will be hoping your bets turn in to gold as the Alchemist’s Lab uses the traditional 3 reel 1 line slot approach. The theme of the slot is instilled in a absorbing interface with a top award of 10, 000 coins there to be won in an exceptional bonus game.

The interface is the first thing that gets you in the Alchemist’s Lab online slot machine. The reels are designed to look like they are on cryptex, the paytables are depicted as opened spell books, the main buttons for placing bets are indicated as fire bellows and conical flasks are utilized to present wins and current bets. These are not the only things that are given a link to the theme as the icons on the reels depict the theme too. There are varyingly shaped containers with differing coloured substances, gold coins and rings. Also, there is the Alchemists book which is a special icon within the game. 10, 000 coins can be won as the top prize if 3 gold coins in a row are obtained during a max bet. As mentioned before, the book is a special icon as a special bonus feature can be played if 3 in a row are revealed.

Brilliant sound, graphics, and game design are just a few of the things going for the Alchemist’s Lab. Its exceptional interface makes it one of the leaders of the pack in online slot games. Couple this with the top prize of 10, 000 coins and the gripping bonus round, its looks like you might be onto a winner.

When spinning 3 icons of the special books across the payline, players are transported to the bonus round. It takes place in the Alchemists cauldron where there are the player must choose 3 differing substances of colour from a possible ten. The player must create the most gold they can as the contents of the three chosen flasks is poured into the cauldron and then poured into a coin mould. With a little luck, a gold coin awaits the player which will be valued, then added to the balance of the player.