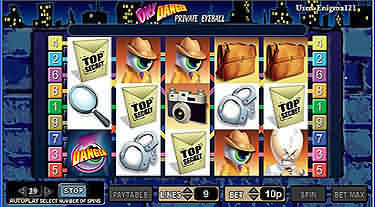 Dick Danger is an online slot game that encompasses a 5 reel 9 line interface and a zany theme. With coin values reaching the 5.00 mark, and a 5,000 coin high prize, there is some definite worthy rewards to be earned by an adventurous player. With the inclusion of an awesome bonus game, wild and scatter icons, the game has all the ingredients to make it an enjoyable online experience.

The hilarious theme that runs through the game is definitely evident in the use of icons. A range of comical characters populate this facet of the game from Dick Danger himself (a private eye, an actual eye clad in a typical trench coat) to a villain called fish face (a character of a man with a fish as a head) amongst others. Handcuffs and briefcases are also included, and when factoring in the jazzy tunes, you realize the developers have gone that extra step in conveying that private eye, film noir type of atmosphere that many classic movies have adopted. Prizes are nothing to scoff at either, and you can earn yourself the top one by revealing five fish faces along a line. Wilds and scatters are also present to spice things up.

Dick Danger contains a thoroughly enjoyable theme that has been beautifully crafted into an easy to use interface. With great prizes and an assortment of extras, it looks like it won’t take players long to get on the trail of some brilliant rewards. Quality stuff.

The wild symbol is represented by the eyeball clad in the trench coat, and makes an appearance amongst three reels located in the centre. This icon can replace where necessary (with the exception of scatters) to produce winnings for the lucky player. The icon is also the means by which the player can access the bonus round.

The scatter icon is represented by the Dick Danger logo. Reveal more than one and the player will obtain their bet multiplied by varying amounts. This amount depends on the how many scatters are revealed. Multiply your bet by 1, 5, 10 or 100 by revealing the scatter on 2, 3, 4 or 5 occasions.

The bonus game is a well developed one involving a building consisting of fifteen windows. The player has to make six selections, and aims to select the same individual on three or more occasions. If this occurs, rewards are earned. Also, if you achieve this, and your selections correspond with the individual that enters the door, the rewards received will be then multiplied by three. That’s not all. The player gets this opportunity through three goes, making this bonus round a possibly lucrative one.