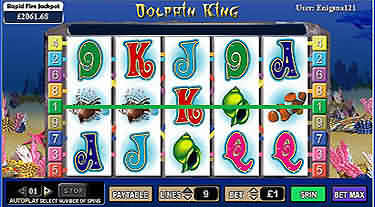 Dolphin King is an online slot game that incorporates a 5 reel 9 line interface that consists of a 10,000 coin highest prize. There is also a progressive jackpot amongst other features including wilds, scatters and free spins making this game maybe as smart as the real dolphins.

Reveal five dolphin king images consecutively and 5,000 coins are headed your way. A 0.05 to 5.00 value range designated to coins substantially improves matters, giving the game play a sense of flexibility. Twenty free spins can also possibly be won by a lucky player, and any winnings earned during this process are multiplied by two. Wilds and scatters are also included, increasing the avenues available to earn some rewards.

Dolphin King is a great foray into the realm of online slots that includes one of the most beloved sea creatures, the dolphin. With excellent prizes coupled with great presentation including eye catching graphics, animations and decent sound design, Dolphin King is certainly worth some of you time and effort.

The progressive jackpot defaults to 500.00, so anytime it is won, you are sure to receive some excellent benefits. Just be wary that the likelihood of gaining this prize is influenced directly by the amount you bet.

The wild symbol is represented by the dolphin king icon and it can replace where necessary to create winnings for the player. If this special icon is revealed on the first and fifth reels, twenty free spins are yours, where any rewards obtained during this period will be multiplied by two.

The scatter symbol is represented by the pearl icon. Reveal two or more of these special symbols and you will already receive a multiple of your bet. Reveal five and receive your bet back, but only after it has been multiplied by 100.

As mentioned previously, reveal the dolphin king on the first and fifth reels, then twenty free spins are headed you way. In this mode, rewards that are won will be multiplied by two. More free spins can also be won during this time, not to mention the awesome progressive jackpot.