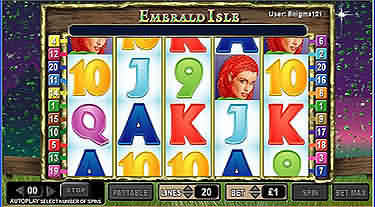 Emerald Isle challenges players to beat the luck of the Irish which has been introduced into another well-designed novelty theme bonus round online slot including free spins and multipliers. Top bets are a massive 5 coins down to the standard 0.01 minimum giving a 1 coin per win line limit over 20 lines throwing in a 6000 coin jackpot.

Playing cards and lucky charms make up the cultural Irish theme with symbols sharing equal payouts. 5 leprechauns make up a 6000 coin jackpot and 1500 coins for a beautiful red head female called Erin, displayed 5 times. The four leaf clover and the pot of gold icon's share the third highest payouts with 500 coins for five lined up on a win line. Ace and king share the fourth highest payouts with queen and jack coming in at fifth.

The Leprechaun is a true Irish gentleman giving away the cash where just 1 on a wagered win line will pay punters a x2 multiplier with 2 paying up to x10 the investment.

Extras include scatter and wild symbols maintaining cash flow plus triple payout during the free spins round. For another feature embracing Emerald Isle’s scores of paying prospects look out for the shamrocks!!!

Not only is the leprechaun the road to jackpot payouts and easy additions adding to player cash reserves, it also steps into icon combinations completing a set of symbols on staked win lines.

Scatters make their usual welcomed appearance as the rainbow. 2-5 combined across the reels in any place even if the win line is not enabled will pay out up to 100 coins for 5.

Line up 3 scatter symbols in a row across the reels in any position to enter into the x10 free spins round. Any combinations landed on the reels through free spins will automatically triple the win amounts. Free spin rounds activate using your original stake and enabled win lines until the spins have been used up.

The leprechaun launches the bonus feature when he appears over reels 1 and 5 in any position. Up to three attempts in continuous succession can be played where selecting 3 out of 6 shamrock cards will unveil up to a x100 multipliers of the total bonus round trigger bet. The bonus round continues up to three times if the first and second rounds are successful.