You are here: Home / Online Slots / Living in Luxury Slot 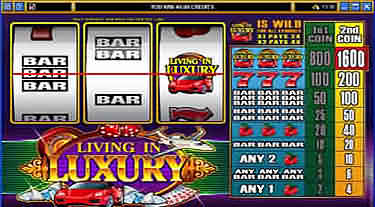 Living in Luxury is a fun traditional online slot that houses a 3 reel 1 line interface. 1,600 coins make up the game’s top prize. This might not seem that big a deal, but when combined with a value range of 0.25 to 5.00 designated to coins, matters are substantially improved. A maximum of two coins can be bet with varying paytables determined accordingly. A wild is also included that significantly boosts the chances of winning some great prizes, making Living in Luxury quite the possibility.

This game is brought to you by Microgaming and contains many similar elements from their other titles of this type. This is not necessarily a bad thing however and as the old adage says, “If it ain’t broke, don’t fix it.” The game is simple in nature and those looking for a more story driven, feature filled slot should look to the more complex slots available online. That is not to say there isn’t fun to be had here because there surely is. Icons range from the traditional to the more theme related with BARs and 7’s to the game’s main logo amongst others. The latter being the wild which can grant you the more benefiting rewards.

Living in Luxury does recycle many attributes contained in other similar traditional slots, but it is also still a lot of fun. With games containing this amount of scope and design, it can be sometimes difficult to separate them from the pack, so varying themes and illustrations are sometimes the most you can get from these titles. However, these borrowed elements are built from success, and Living in Luxury is no exception. If you want a more theme driven title with many additional features, play a more complex, multi faceted slot. If you however want a more relaxed time at the slots while playing in luxury, give this one a whirl.

The wild symbol is represented by the game’s main logo. It can replace where necessary to create winnings for the lucky player. If a successful combo utilizes one or two wilds, the resulting prize will either be doubled or quadrupled. 800 or 1,600 coins are headed your way if you reveal three wilds along the line and you play with either one or two coins.