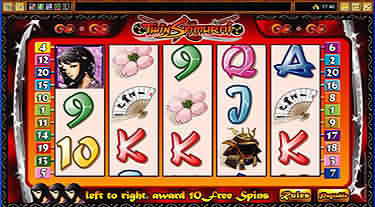 Twin Samurai makes use of a 5 reel 25 line interface that houses a 5,000x multiplier as the game’s top prize. Game play proceedings are substantially improved with a value range of 0.01 to 0.25 designated to coins coupled with the ability to play a maximum of 20 coins on each line. With additional gaming facets that boost the likelihood of winning great prizes, Twin Samurai is nothing to poke a sword at.

Twin Samurai bases its theme on, you guessed it, the ancient Samurai code. The initial video that greets the player conveys the cool ancient Samurai element of the game, and this is further explored through the use of appropriate icon images. Speaking of icons, there is a pair you should keep an eye on. One is the image of the twin samurai who are limited to appearances on the second and fourth reels. The other icon is the image of the Geisha who represents the scatter and can both grant you free games and also multiples of the amount you betted.

Twin Samurai will appeal to many a gamer with its alluring plot based on ancient traditions. The presentation and game play contained in this title is top notch, not to mention the great prizes and extras. Put the samurai sword away, sit down, relax and enjoy this exceptionally produced title. You won’t be disappointed.

The wild icon is represented by the image of the twin samurai. It can replace where necessary (granted its limitations to specific reels) to produce winnings. Produce the appropriate combo (on the second and fourth reels) and given it has the ability to replace, you will then be greeted with an awesome samurai animation. The image of the Geisha represents the game’s scatter. Earn 2, 5, 20 or 100 multiples of the amount you betted by spinning 2, 3, 4 or 5 scatters upon the reels.

Receive ten free games by revealing at least three scatters along the lines. If successful combinations are performed during the free spin process, the eventuating rewards will be multiplied by two.