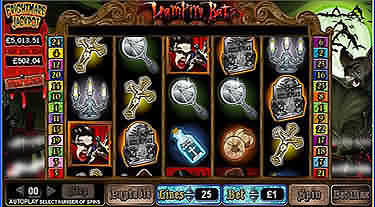 Vampire Bats is a scary online slot brought to you by the folks at CryptoLogic. The game incorporates a 5 reel 25 line interface which houses a 3,000 coin top prize. A value range of 0.01 to 20.00 designated to coins improves the playability aspect of the game significantly perhaps eroding the horror of the theme that initially greets you.

Vampire Bats is a scary game that will have you on the edge of your seat. Presentation elements all engross the player into its horrific theme with excellent animations and sound design. Icons in the game also convey the eerie theme with the vampire holding significance as you could win 3,000 multiples of your betted amount if you reveal the image along a line five times. You could also win free games and produce lucrative combos via the use of the vampire bat icon. All this plus the progressive jackpots will most probably make you brave the more frightening elements of Vampire Bats.

Vampire Bats is a well put together slot that combines a high quality of presentation with excellent prizes. There are many ways to grasp the awards and a host of extras that make the game play aspect of the title interesting. Combine all this with a frightening theme, and Vampire Bats will definitely have you both tense and happy at the same time.

The progressive jackpots are associated with three other slots (Frightmare games) and can be won at any moment. The amount you bet however can influence the probability of receiving this awesome prize.

The wild is represented by the image of the vampire bat. This icon only shows up on the second, third and fourth reel and can replace other images to produce winnings. Reveal it on the second and fourth reel simultaneously and four free games are headed your way. Spin the scatter more than once and you will receive benefits already. Reveal five and be ready to grasp 100 coins.

As mentioned in the above, reveal the wild on the second and fourth reels simultaneously to gain free spins. Some awesome prize can be won during the free spin process.