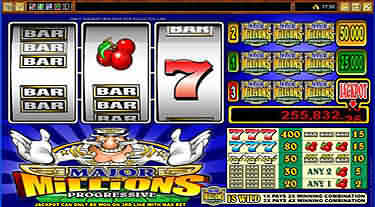 Major Millions is an impressive online slot offering that adopts a 3 reel 3 line interface. Microgaming is at it again with this one, and this time a progressive jackpot is on the offerings, which certainly spices things up. In addition, there is also the wild symbol depicted by the logo of the games title, which enhances the level of prizes that can be won by the lucky player. Give this one a spin and major prizes could be on their way.

An excellent intro is included in this slot that sets the scene from the get go. A 250,000.00 progressive jackpot is visible almost immediately and is a very enticing element of the game. The success of this game has been such that a 5 reel update was designed, much of it derived from the layout and jackpot present in this version of the game. Although the jackpot is mightily impressive, the game is focused on simple and effective design, and MIcrogaming has provided this through the use of their sound libraries and animations. Icons are a mix of the more traditional elements and game centric items such as BARs, cherries and the Major Millions image that represents the wild icon.

Although the Major Millions web based slot game seems like the usual take on the traditional slot experience, it is the excellent progressive jackpot that sets it apart from its counterparts. Who says that tradition is boring anyway? With its simple and traditional design (that is easy to use) combined with alluring prizes, this game is worth any slot enthusiasts time.

To access the progressive jackpot, the player must fulfill a few requirements such as betting three coins at a 1.00 value designated to each (maximum bet). To gain the jackpot, reveal three Major Millions icons along payline 3. Once the jackpot resets, you will be happy to discover that it will at its worse reach 250,000.00. Now that’s impressive.

The Wild Symbol is represented by the icon depicting the Major Millions image. This icon can replace where necessary to create winnings for the player. Its other function is its ability to capture the progressive jackpot, which is the one that all players want.