You are here: Home / Online Slots / Hole in Won Slot 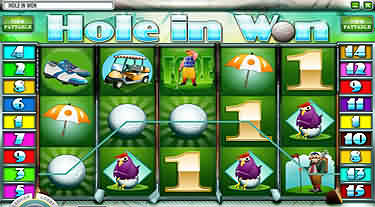 Hole in Won, apart from being an awesome play on words, is a game that comes from Rival Gaming Software that falls under their i-slot category. It utilizes a 5 reel 15 line interface and contains a 750x multiplier as its top prize. The prize is greatly improved upon, however through a coin range of 0.01 to 0.25, and the ability to place up to 5 coins on each line. Throw in some scatter and wilds, an enormously entertaining bonus stage and the Hole in Won slot will make you feel like you’ve won just by taking it for a spin.

From the get go, it might not be blatantly obvious that this is an i-slot game, but after you have played through the bonus stage, it will indeed become more apparent. The mood is created quite quickly with a wonderfully presented intro video. The theme is continued through the use of the many icons contained in the game. From golf balls to buggies, much of the golfing equipment is here. The special ones to look out for are the Eagle and Birdie, (a wild and bonus) and the 1 image which pays the most. Earn either the 50, 125 or 750 line multiplier by revealing 3, 4 or 5 of the 1 symbol along the line.

The difference between this slot and many other i slots is the awesome bonus round and the wild symbol that expands. Production values are top notch with a suitable soundtrack, comical and detailed illustrations coupled with great prizes and extras. Anyone interested in slots should give a Hole in Won a whirl.

The eagle icon is a good one to spin. It exists on reels 2, 3 and 4, but when it is spun it creates the effect of making the rest of the reel perform as it they are wilds. Therefore, winning combos are more easily produced which is good news to the player. Look out for the awesome animation that occurs when it is spun as well.

Want access to the bonus game based on skills? Spin three or more birdie images and you will have your way, as well as be an audience to an awesome animation.

Hole in Won Bonus Round

To access the bonus round, reveal three or more birdie images amongst the reels. If you visit the bonus round more than once, each time you progress to the next hole from a total of nine. Use the mouse to direct where you want the ball to travel while the speed and power of the shot is determined by the distance the mouse pointer is from the golfer. A hole in one will give the player rewards. If the player got to the bonus game by revealing a number of scatters greater than three, then a top prize of 37,500 coins could be granted to you.