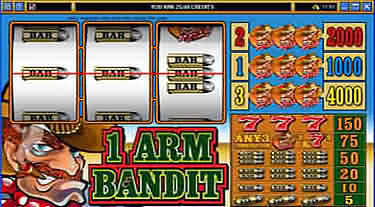 1 Arm Bandit is a slot game involving a traditional 3 reel approach and a top prize of 2,000 coins. This enticing prize can be attained by placing a max bet on three lines. Added to the mix is the coin range of 0.25 to 5.00 which can be placed across the 3 lines that populate the game. Although the game is void of bonus material prevalent in some online slot games such as bonus games and such, 1 Arm Bandit is still an enjoyable experience that’s probably best suited to those beginning their journey in the online slot world.

Microgaming have created another great slot game to include amongst its online content. They also have developed a character based in the games title, The 1 Armed Bandit. The interface is traditional fare, with all the typically represented icons and functions in their appropriate areas. The buttons used for control are located at the bottom whereas the reels and paytables are displayed in the top left and right areas. The main logo and character design is depicted in the central, left area.

The animations and sound effects are nothing out of the ordinary and include the standard spins and wins synonymous with online slot gaming. A surprise however, is the western theme that emanates from the game once winning combinations are spun, adding to the atmosphere that the title suggests. The theme is also infused into the icon designs, with BARs containing a bullet image. However, as with most of these slot games, the best icon to spin is generally the one suggest in the games theme or title. Spin three one armed bandits across the paylines to win 1,000, 2,000 or 4,000 coins depending on the paylines that are spun upon.

The 1 Arm Bandit slot game is a fun little title with an enjoyable western theme at its heart. Although the game is perfect introduction to the slot community for newcomers, experienced players are also likely to enjoy themselves with this slot game containing a western flavor.