You are here: Home / Online Slots / Bars and Stripes Slot 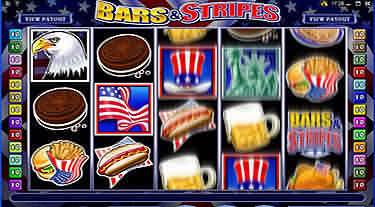 Bars and Stripes (as the name suggests) successfully merges the perceived American culture (hence the play on words from the term, stars and stripes) with an online slot game. It utilizes the 5 reel 25 line approach and contains many elements vital in creating a successful slot experience. These include a 50,000 coin top prize, and other notable additions such as a bonus round and 2 scatters just to name a few. With all this added functionality on top of great prizes, Bars and Stripes provides ample entertainment for anyone looking to get their slot fix sorted.

As mentioned in the above, it is the amalgamation of American culture with slot functionality that makes this game a successful one. Options include the ability to play on any given line up to the amount of ten coins which include a range of values from 0.01 to 1.00. There are many icons included in the game, three of them which have a special function. There are two scatter symbols, being the American football and the Uncle Sam hat. The first scatter allows the player to win multiples of the amount they betted. The second scatter can transport you to the exceptional bonus feature. The wild icon (bars and stripes icon) is the player’s gateway into earning amazing prizes depending on the combo that is pulled off.

With an enormous amount of functionality coupled with an entertaining theme and easy to follow and use interface, it looks like Bars and Stripes is well on its way to becoming a successful slot. It is definitely worth a spin next time you’re online looking for a slot to play.

The wild symbol in this game is the Bars and Stripes icon. It performs the usual functions provided by a wild, being the ability to replace where necessary to produce winning combinations. If the wild is utilized as part of any win, that win is multiplied by 2. Gain the 5,000 multiplier by revealing 5 wilds consecutively.

The scatter symbol aspect of this game is an awesome one as there are two included instead of the common one scatter that is present in most online slot games. The American football symbol is one of the scatters and can win the player multiples of the amount they betted. Simply do this by revealing more than three of these icons on the reels. This action also permits the player to gain the top prize. In regards to the other scatter (the Uncle Sam hat), reveal three or more and the bonus round is yours to enjoy.

Bars and Stripes Bonus Round

To get to the bonus game, reveal three or more of the scatters (Uncle Sam hats) on the reels. The amount of rewards you receive depends on the amount of scatters revealed. If 3, 4 or 5 of the scatters were utilized on the lines then the rewards from hats 1, 2 and 3 could possibly be yours to enjoy. This could mean the opportunity of gaining free credits.