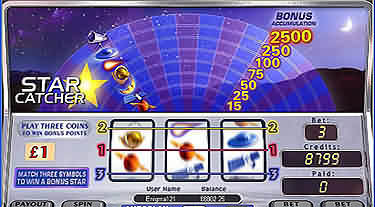 Star Catcher is a star of an online slot that utilizes a 3 reel 3 line approach. The reason it’s such a star performer is the presence of a great top prize which is accompanied by a bonus game. Speaking of the top prize, this comprises of 2,500 coins and when partnered with a 0.25 to 1.00 value range designated to coins, the ability to win enticing prizes is not farfetched. Give this one a go and you could be the star, with all the prizes you just might win.

CryptoLogic brings you a game that successfully combines the traditions of a slot with the elements of modern game play such as the included bonus feature. Effective elements that portray the games theme are included such as animations concerning the night sky (shooting star) to an appropriate sound design that includes sci fi sound effects. The icons in the game also continue the trend related to the games theme, such as planets and UFOs amongst others. Play with a maximum bet and the bonus feature could possibly be reached. Reveal three of the same icon on a line and winning are headed your way. However, you also receive a star. If a lucky player obtains seven of these for a single icon, a bonus is also yours to gain.

Star Catcher is a unique game, as in it effectively combines traditional elements but gives it a modern twist in regards to the way rewards are calculated. It stands as one of the more entertaining examples of its type, and anyone with an interest in the science fiction genre should give it a try.

The Bonus game is not really a separate entity in itself, but rather a part of the actual game play mechanics. Enable all lines and reveal one symbol three times along one of the enabled lines. You then receive the appropriate reward and a star. Each icon has a reward designated to it, so once you obtain seven stars of that icon, the corresponding prize is headed your way. The planet icons offers a 15 coin incentive if the above is achieved while the telescope offers 500 coins.