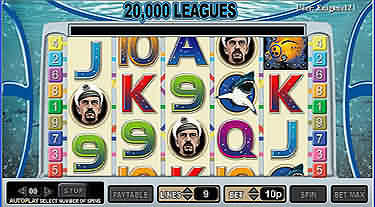 20,000 Leagues is based on the well known novel, 20,000 Leagues Under the Sea. It incorporates a 5 reel 9 line interface with a top prize of 5,000 coins. Couple this with coin values ranging from 0.05 to 5.00 and you just know there are some awesome prizes to be won. If that wasn’t enough, there are also free spins and a duo of wild symbols making this lot exceptional value to anyone that has ever wanted to take on an adventure.

The level of atmosphere present in the 20,000 Leagues slot game is exceptional as you are taken deep under water with a chance of discovering new worlds. CryptoLogic have incorporate the sea theme into this slot with the excellent graphics and appropriate icons. These icons present include sharks, captains and buried treasure amongst others. Sound effects are also well suited with the whaling of sea creatures and other sea related material. To make things even better, the two wild symbols are also effective in winning rewards, not to mention spinning the captain’s logo five times across the line to win the highest prize.

20,000 Leagues is an exceptional online slot game that provides awesome prizes in conjunction with two wild icons that liven things up in this underwater spectacle.

For a lucky player to obtain free spins, they must spin the 20,000 Leagues symbol and the submarine symbol at the same time. Depending upon the amount of submarines that appear on that spin, each one represents ten free spins. At the features conclusion, free spins will be doubled. The free spins are also not a one off occurrence. They can perform again while the feature is played out.